There have been some gray areas concerning what items Kadala has available to sell, and whether or not the difficulty level of the game in which you gamble has any effect on the quality of items.

Will her items scale with difficulty level? Should I gamble in Torment VI so I have the best chance at the epic loots?

No. The quality of Kadala’s offerings does not scale based on the level of game you’re in.

What sort of Legendary items does she potentially have? Can I get a Thunderfury from her or maybe some sweet class-specific set items?

You can gamble with her for nearly any Legendary in the game – including Thuderfury – but she does not offer any Torment-only Legendaries. Her inventory is nearly unlimited, but limited to items which are found outside of Torment I or higher, and items which are not exclusive to Horadric Caches. Horadric Cache bounty rewards contain some specific loot which can only be obtained through the bounty reward sacks.

Here is some official blue on the matter…

It’s possible to get a wide variety of Legendary items from giving your Bloodshards to Kadala, but class set items are not one of them. Those items have a chance to drop while in Torment, but even in that difficulty Kadala’s inventory doesn’t change. (Source)

I have some additional information about the Legendary items Kadala can potentially offer, so let’s get to it (cause it’s good to know!). Previously I said it was possible to get a wide variety of Legendary items from Kadala, but what I have recently learned is that list actually includes all of the Legendaries currently in game except for the ones only found in Torment, and those only found in a Horadric Cache. (Source)

Gambling for Legendaries can be an exciting way to obtain loot. I went all in one evening and blew 325 Blood Shards in an effort to hopefully score a few orange upgrades. On my fourth roll she handed me Blackthorne’s Spurs, which are not fantastic, but still…getting a Legendary on my fourth try I thought was pretty awesome. 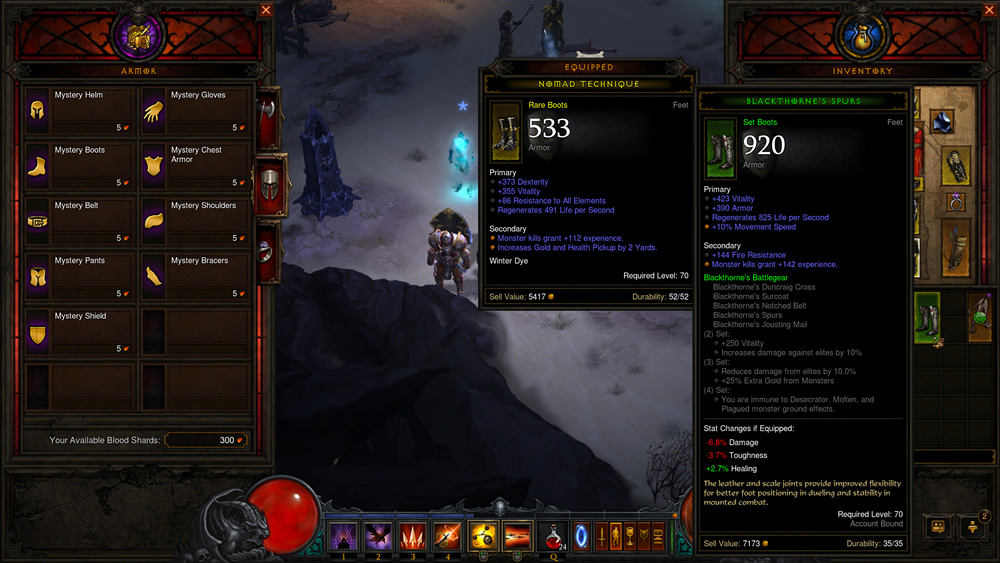 Later I was able to re-roll the +Armor into 489 Strength and they did become pretty valuable for my fresh 70 Crusader, especially since he’d acquired Blackthorne’s Duncraig Cross just a day or two earlier.

I had mistakenly thought that the odds of getting a Legendary were pretty good, but 300 Blood Shards later and all I was left with were a bunch of crafting mats, although I think I may have grabbed a Follower upgrade in the process.

How has your luck been with Kadala? Please share your winnings and losses in the comments below.