Why would anyone ignore this stat?!

A little while back, some very thorough analyses of the Area Damage effect appeared online. I personally love splash damage, and these reports vindicated a long standing debate over the numbers involved, so you would think the player base would have fully embraced the stat by now.

For some reason I can’t fathom, large sections of the Diablo community are still ignoring the value of what Area Damage offers. This is a terrible oversight, so today we’re going to examine the situation a little more closely.

I know most people don’t like math. And more importantly, an incredibly close look at the math has already been done elsewhere, and the people who read that piece already know how great Area Damage is. So instead I want to address the tl;dr crowd:

Diablo 3 is a game that requires you to compare numbers. If you want to be effective when you hit level 70, you need to understand many of those numbers. I’m about to do the hard part for you, and I assure you that all this has been checked and tested.

Here are the simple rules: AE damage triggers one time for every five attacks (on average). Also, splashes don’t hit the original target, so you take the number of enemies in range, subtract 1, and divide the whole thing by 5.

That’s your factor. That number multiplies by your Area Damage percentage stat.

That’s all you need to know.

If you still aren’t interested, I’ll put it another way. Open your Inventory, hit Details, and look at this part:

When you fight two enemies close together, you get 1/5 of that figure as bonus damage. When you are fighting six enemies, you are getting that full amount as bonus damage.

If you managed to bunch up more than eleven enemies all in a tight little group, then you are reaping the benefit of more than double your stat as bonus damage.

There are two main caveats, but I’ll explain why neither of them matter:

The first caveat is that Area Damage has limitations that decrease its effectiveness, specifically: it cannot crit or trigger other procs.

The crit thing is incorrect. Certain people just misunderstood the math, and the fact that the Area Damage always shows up as white damage. If the original attack was a crit then all the splashes are also crits; however, they are not allowed to be double-crits.

As for item procs, yes, it would be nice if I hit 10 enemies with a Meteor and caused two splashes to each hit all 10 again. Meaning, 30 hits total (each with a chance to proc another Meteor), but that might be a bit… excessive? Don’t complain that an overpowered effect isn’t even more overpowered just because your Wizard can’t cause the Kessler Effect.

The second and more reasonable caveat is that splash damage does absolutely nothing when you are fighting a single enemy. 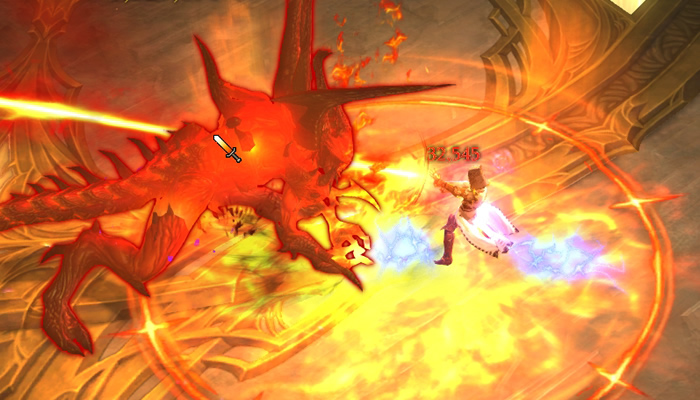 The only time there is one powerful enemy all alone is either a major boss fight (which should be very easy for you, more on that in a second) or when a super-unique is the last enemy alive because you’ve already killed everything else (which should likewise be easy for the same reasons).

We’ve made this argument before, but at the endgame there shouldn’t be a lot of challenges left for you. You have faced every chapter-boss enough times that you know what they can do. If you die fighting one of them it means you turned up the difficulty level to where you shouldn’t have, or because you made a mistake.

Set your difficulty level to what you know you can survive and stop making stupid mistakes, then the only time you should be in any danger is when you are fighting incredibly large hordes of enemies with many elites in the mix, and at your level, those are the only battles worth pursuing anyway! Those are also the battles where Area Damage becomes super-effective!

A Thought on Paragon Points

Even if you don’t want to pursue gear with Area Damage, at least prioritize it with your Paragon Points. Let’s look at the competition it’s up against: 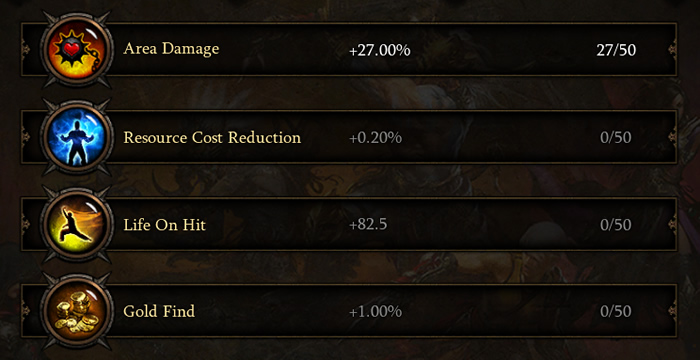 Resource Cost Reduction. Yes, a lot of people recommend this. Many powerful builds try to abandon their primary generator to get a better power, so this is probably the second best option on the Utility tab. But you are getting a paltry fifth of a percent for each point, instead of a full percent of splash. If fighting with your preferred style of play causes you to keep running out of mana – unless you have that 10% reduction – consider rethinking your build before you sacrifice 50% Area Damage (or else just earn another 200 paragon levels).

Then there is Life on Hit. It is the weakest of the healing stats, but shouldn’t be. It has the best progression curve, but it is hobbled by a terrible proc coefficient. Maybe when the numbers are rebalanced it will take its rightful place above life-per-second, but until then, it’s a lower priority for your points (unless you are dying too much, in which case, you are probably just making mistakes).

I can only hope more people start taking advantage of Area Damage, because there are a lot of demons not dying fast enough out there.