How Magic Find Works in Diablo 3

Magic find increases your chances of getting higher quality magical items from mobs. Your increased magic find applies a percentage-based increase to a mob’s likelihood of dropping a magic item of a certain quality. In other words, it does not stack with a mob’s percentage to drop something – it merely increases the mob’s chance to drop an item by a certain percentage.

For Example: Let’s say your magic find is buffed up to 200% and you come across a rare monster who has a:

With 200% increased magic find, the likelihood of magical item drops from the same monster will change to this:

In this case, getting a set item or Legendary would still require a tremendous amount of luck, but the chance to get a rare item substantially increases from 4% to 12%.

Keep in mind that magic find also applies to things like treasure chests, barrels, lootable corpses, etc… For example, smashing a barrel open has a chance – albeit very, very small – of yielding magical items as well.

Which items in Diablo 3 have magic find on them?

Nearly all of the gear in Diablo 3 can possess the magic find stat, however, based on what’s been seen in the beta – it’s not certain whether any weapons will carry the stat.

Is there a limit to how much magic find you can have?

In short, no, but there will likely be a limit on how much of the magic find stat you can have in order to be viable as a magic find character. Piling on magic find means giving up other valuable stats which could increase your damage and survivability. Since we’ve yet to see the later acts and higher difficulty levels, it’s tough to say what sort of stat sacrifices can be made for magic find, but expect that there will be some sort of “soft cap”. This soft cap will likely vary depending upon character, build, and whether you’re soloing or engaging in co-op play. 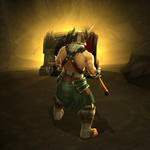 Solo play offers the biggest boost to magic find for two reasons: you get to enjoy all of your magic find stat without a group average bringing you down (see co-op play below) – and – you can bring a magic find equipped follower along. However, it’s likely that solo magic finding will not be as effective as group magic finding. The reason being, groups will be tearing through mobs much quicker, therefore more items will be dropping.

Followers provide players with 20% of their magic find stat. So, if you’re solo magic finding with a follower who has 140% magic find on their gear, you’ll gain an additional 28% magic find.

When players are in a party, their magic find % is added to all of the other players’ magic find in the group, then redistributed to the group as an average.

For the guy bringing 150% MF to the group, this would be sort of a bummer, but…this would be offset by the killing power of the group. Obviously, the player with 0 magic find will benefit the most – since they will be inheriting a free 62.5% – however, they may also be producing a healthy portion of the group’s damage, thus earning their keep.

This answer is fairly subjective, but in most cases, yes. Although you can stack more of the stat if you’re playing solo, you’ll down a lot more mobs within the same time frame while farming in a group. More kills = more drops.

However, for a highly skilled player, solo magic finding may be the way to go. You may not kill mobs quite as fast – but with a good build and stacked MF (including a +MF follower) – you could certainly be an effective MF farmer due to the extreme magic find boost you can have while playing solo.

The loot system in Diablo 3 has changed from Diablo 2, in that loot is now designated. Instead of each player furiously scrambling to click on, and snatch up all of the loot after a boss kill, players will now only be able to see and pick up the loot intended for them.

When magic finding in a group, you won’t be rewarded with any additional loot, but you may have access to a wider variety of loot – depending on whether or not your party members are friendly. If so, they may be able to trade or sell you an item drop that your character can use, but instead had been designated to them.

For example: If you down the Skeleton King with three other players, that means he’s going to drop 4 times the amount of loot that he would drop if you were soloing him. That means a 4x greater chance that he could drop something you need. Thing is, though, you’d need to be in a group with players who’d be willing to open trade with you in order for you to benefit from the additional chance at loot.

If you’re in a party with friends, group magic finding will definitely be the way to go.

The Nephalem Valor buff is an exciting new game mechanic that the Diablo 3 devs are planning to implement once the game goes live. Here is how it works…

Whether in a solo or public game, when someone kills a rare mob or pack of champions – each player in the game is granted a magic find buff, called Nephalem Valor. At present, the buff doesn’t have an expiration, but it will be cancelled if you swap out skills, swap out a skill rune, or leave the game. It’s also possible that the buff might cancel upon death, but this hasn’t been confirmed.

The Nephalem Valor buff gives players a reason to stick within the same game – plowing through loads of monsters and bosses – rather than constantly creating new games and farming one or two bosses repeatedly.

The other idea behind it is to have players gain a magic find advantage, while sticking with a current build. There will likely be an ideal magic find build for each class, but Blizzard wants to encourage players to spend some time with each build, rather than swapping about all fancy crazy. I guess they feel the Nephalem Valor buff will give players a reason to really spend some time with a build before they try out another. 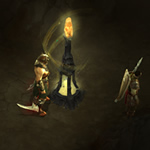 If you encounter a Fortune Shrine, grab it and make your way to the nearest area with a rare monster, or do a boss run if you are close enough. Fortune Shrines increase magic and gold find by 25% for 2 minutes. This isn’t a huge buff, but it is a decent magic find buff nonetheless.

You’ll often find that these Fortune Shrines are “conveniently” placed in random dungeons and areas that are rife with champions and rares, so you seldom have to travel far anyway.

It’s too early to say which class(es) will have the best advantage for magic finding, but the early predictions have Barbarian, Wizard and Witch Doctor in the lead, as far as solo play is concerned.

Barbarians have the advantage of being the only class in the game with a rune skill (Birthright) that benefits from magic find — Hammer of the Ancients can be runed to increase loot drops. The rune doesn’t increase magic find, but it does cause mobs to drop additional loot, which could be magical, rare, etc… Barbs also have high survivability, which is of paramount importance to being a good MF’er (Magic Finder, that is…).

Wizards should be decent at magic finding due to their ranged attacks, AoE spells, and ability to teleport – which will be useful for escaping damage and for moving through the game world quickly.

Witch Doctors will have the advantage of ranged attacks, along with minions who will be able to tank and do damage. It’s tough to say how formidable the WD’s minions will be if clad in high MF gear, but regardless…the Witch Doctor should still prove effective at magic finding.

The Demon Hunter could be an effective magic find class, but I suppose they’d be a bit limited by having to use a 2H bow in order to maximize the bonus. A dual wielding DH would lose out on any magic find bonus gained from an off-hand (quiver, in the case of the DH). I also think the Wizard might be better suited overall due to their increased variety of ranged spells, AoE and mobility…but then I could be wrong.

I’m sure Monks will be a good support class in magic find groups – with their decent DPS, mantras and heals – but for solo magic finding I don’t think they’ll be all that effective. Barbarians will likely be the melee MF class in Diablo 3 due to their higher survivability and rune skill benefits.

For magic finding, ranged classes have a leg up due to their ability to kite, which reduces the amount of damage taken. Monks might have problems getting one-shotted while in melee range, where as a Barbarian will be able to withstand quite a bit more punishment. Plus, the Monk’s DPS stat (agility) grants dodge chance, where as the Barb’s (strength) grants armor. Armor provides a straight damage reduction, while dodge is up to the game’s RNG (random number generator) to determine whether you get hit or not.

For melee magic find, go with a Barb. At least, that’s what I think. 😉

For those not familiar with multiboxing, it’s where a single players controls multiple characters at once within the same game. This requires separate Diablo 3 accounts, along with software and hardware to allow for it. As long as you don’t use any sort of bot, Blizzard is fine with players multiboxing – provided they are physically controlling each character.

Multiboxers are likely getting pumped about the prospects of magic finding in Diablo 3. Multiboxers will be able to form very balanced magic find groups, while being able to ensure that their players are stacked with the highest possible amount of MF. In addition, multiboxers will also be able to ensure the loot goes to the proper characters. Although loot is designated to each player in a party, it does become tradable once that player picks it up. A multiboxer would be able to loot a crossbow on his Monk, then open trade with his Demon Hunter in the same party.