New to Reaper of Souls, bounties are perhaps one of the most plentiful means of acquiring Paragon levels and Legendary loot. The premise is simple: complete one of 25 randomized objectives, and receive a reward. But not all bounties are created equal, with some proving far more lucrative than others.

In this guide, we’ll take an intimate look at the ins-and-outs of bounties, glossing over some basic strategies that will have you feeling like Boba Fett (before he was swallowed by the sarlacc) in no time.

Bounties are unlocked by beating Reaper’s primary antagonist Malthael. The good news is that once old Malthy is laid to waste, all of your characters will gain access to Adventure Mode, regardless of whether they’re a pimped out Champion of Sanctuary or a level 1 whipping boy.

Upon starting a new Adventure Mode game, players will have access to 25 new bounties – or five per act. Bounty objectives are semi-randomized. I say “semi” because there are a finite number of possible bounty objectives per zone, usually three.

The zones in which bounties occur are also semi-randomized, as there are always five bounties per Act and never more than one bounty per zone.

Completing a bounty rewards players with varying amounts of gold and experience, depending on the bounty type and difficulty setting. You’ll also receive Blood Shards and more often than not a Rift Keystone fragment.

Blood Shards can be used to gamble on gear, and five Rift Keystone fragments can be harnessed to open a portal into another dimension, otherwise known as a Nephalem Rift.

Should you be committed enough to complete all of an Act’s bounties, you will receive an additional gold / experience reward, as well as a Horadric Cache. The Cache typically contains an assortment of crafting materials, gems and Rift fragments in addition to a rare/legendary item or two.

In short, even if you’re not a stickler for optimal strategy, the benefits of completing bounties are certainly worth your while.

Let’s dig a bit deeper, shall we? There are four types of bounties, as follows:

Experience rewards for completing bounties vary widely, as exhibited below:

Do note that experience rewards scale to difficulty. In other words, since Torment I awards a 300 percent experience boost, the experience rewards for completing a bounty are four times greater than they would be on Normal. Likewise, those brave enough to tackle a max bounty on Torment VI would receive 65.569 million experience – or 17 times Normal experience – for successful completion.

Completing all of an Act’s bounties vs. completing the easiest bounties

Some bounties are notoriously easy, taking a minute or less to complete. Thus, an argument can be made that you should focus your efforts on completing the very easiest bounties as opposed to picking an Act and trudging through all five bounties.

While certainly a valid stance, it’s one that I’d argue against for the following reasons:

To date, I’ve only found one bounty that is arguably worth farming for experience, and that’s Hell Rift 1.

Two of the possible three bounties will require you to kill a named mob, while the third asks that you clear the very small second level. Those who complete the latter will receive a max bounty bonus for cleaning house.

Oh, and before I forget, Hell Rift 1 frequently features a Cursed Chest event, serving to boost your already high experience gains even further.

So yes, farming Hell Rift 1 is probably just as rewarding, if not more so, than completing an Act’s five bounties. But you’ll still miss out on Rift Keystones, Blood Shards and a bunch of other worthwhile stuff.

In which Act should I farm bounties?

That depends. If you’re looking for a particular Legendary, you’re best off farming the Act(s) in which that item drops.

But under most circumstances your primary objective will be to reap the highest experience rewards in the shortest amount of time.

Alright, so what Act is the best for farming XP? The answer, my friend, may surprise you…

I’ve taken the liberty of running my fairly geared Wizard (900k+ buffed DPS, 5 mm toughness, 60% +Cold damage) through each Act’s bounties multiple times (at least five each) on Torment I. I did not equip a +XP gem in my helm nor did I brandish a Hellfire Ring or indulge in a Pool of Reflection.

I then compiled my findings into several revealing data averages, as listed below:

It was concluded that Act IV is the single best Act for farming bounties, followed by Act III, V, I and II. 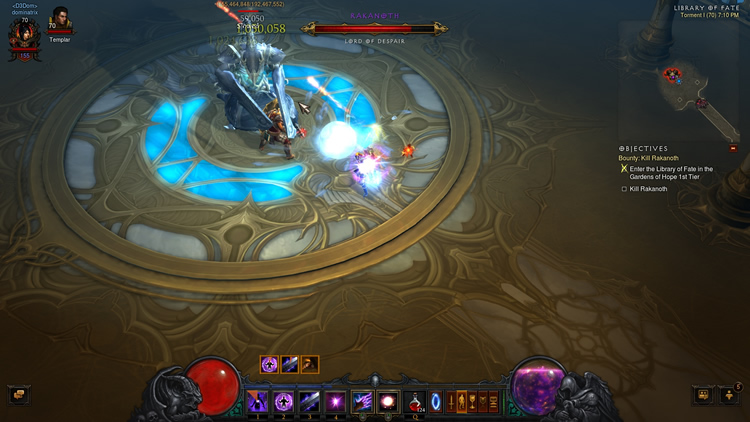 Pre-RoS, Act IV was known as the Act no would ever dare farm, but for reasons listed below, it’s perfect for bounty farming:

Act III gets our runner up spot, mainly because the maps tend to be on the smaller side – well, at least most of them. Act V takes third, not because the maps are small per se but because they feature more side events than zones in any other act. Expect Act V bounties to take a while, but to gift more experience per bounty than other acts.

Fourth place goes to Act I, which features too many larger maps and too many zones to farm effectively. And finally, as expected, our Diablo Razzie award goes to Act II. Nearly half of Act II’s many zones are gigantic and difficult to navigate. As you may have guessed, the more time spent running around, the less time spent completing bounties.

Maybe you’re not into experience. If loot is your thing, the best way to acquire it is through what’s commonly referred to as split bounty runs.

Here’s how they work:

A solid team can finish an Act’s bounties in approximately five minutes. That’s 12 Horadric Caches an hour. I do suspect this farming mechanic will eventually get nerfed, but for now it’s the single most effective way to acquire loot in the game. 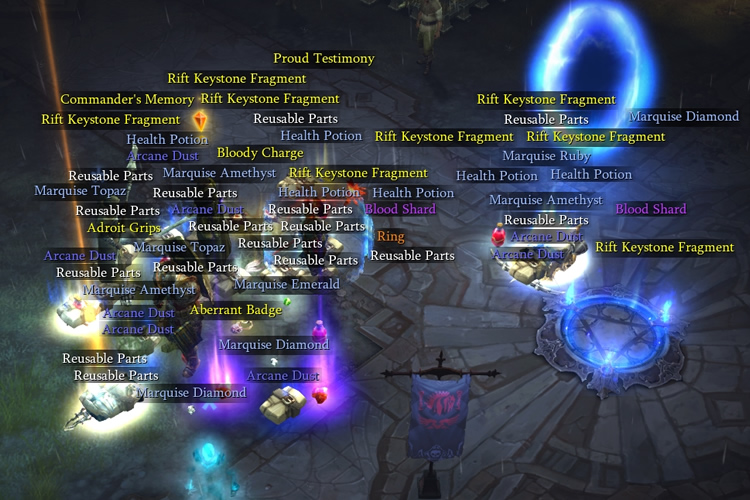 Thus concludes our discussion of bounties. Now that you’re an expert, I suspect I’ll see you on the battlefield kicking butt and taking (purple) names of your own. Good luck!