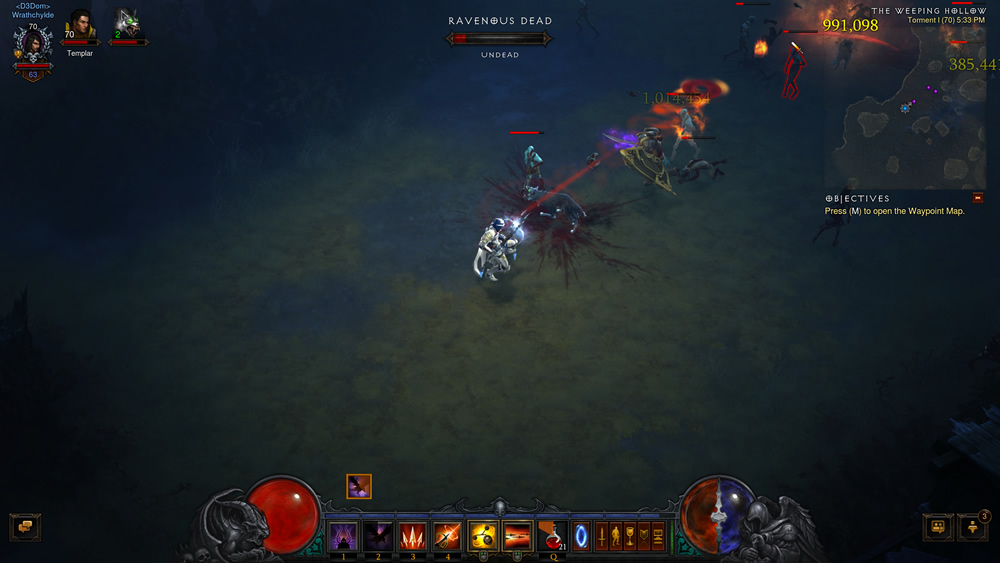 After playing for nearly a week in Reaper of Souls, I’ve settled into a build that I’m really enjoying. The build is somehwat gear dependent, and while I’d prefer not to promote such types of builds, this one is pretty great if you can acquire at least one of the items.

One of the first Legendaries I snagged while out adventuring in Act V was Emimei’s Duffel. Upon first inspecting it, I was immediately liking all of the stat upgrades. It has a lot of nice stuff on it such as: dex, vit, attack speed, crit, Hatred regen, + Discipline, but the most interesting one is:

I’d experimented with Bolas a little bit on my journey to 60, but never used them for long, preferring either Evasive Fire or Entangling Shot; however, I immediately switched to Bolas once this quiver dropped for me. Without the delay on the explosion, Bolas are freakin’ awesome, but what makes this quiver so spectacular is that it’s effect overrides the delay on Imminent Doom – allowing for kabooms of instantly exploding Bolas with the added damage buff. This is definitely hot stuff.

The next piece of gear I nabbed which really takes my build to the next level was my Buriza-Do Kyanon. When I first identified it I was excited to see this item in the game, as it brought back some memories of Diablo 2. 🙂

Now, although it shows as having fairly poor paper DPS (I lose 136K when I equip it over my Manticore which is 2 levels lower), it’s an insanely powerful weapon when combined with Emimei’s Duffel. Regardless of the other stats on this weapon, the one that really makes it shines the guarantee that your attacks pierce 2 additional enemies, which means if you’re facing multiple mobs in a frontal cone, you’re basically firing 3 instantly exploding Bolas with every shot. Mine also has an 8.5% chance to freeze mobs, which is a really nice proc. I also landed one with cold damage, which is decent, but once I get a little wealthier I may try to see if I can get the Mystic to reroll that into +Fire. 🙂

These 2 items have revolutionized my game play. I keep my manticore on hand for boss fights where higher single target DPS is needed, but 95% of the time I now roll with my Buriza. Although I don’t feel as powerful as a Frozen Orb Wizard, I’m still a force to be reckoned with and the build is insanely fun. With my companion buff active, I sometimes see crits as high as 1.4M, which is redonk for a hatred regen ability. Furthermore, I’m never low on resources. I basically tear through everything with my Bolas, activating my Companion Buff when available, then I switch to Strafe or Rapid Fire when I need those abilities, but most of the time the Bolas get it done.

This is a fun and fairly easy build to play. I really enjoy it. Even without the Buriza, if you manage to score an Emimei’s Duffel and can scare together some +fire damage gear, I highly recommend giving something like this a whirl. 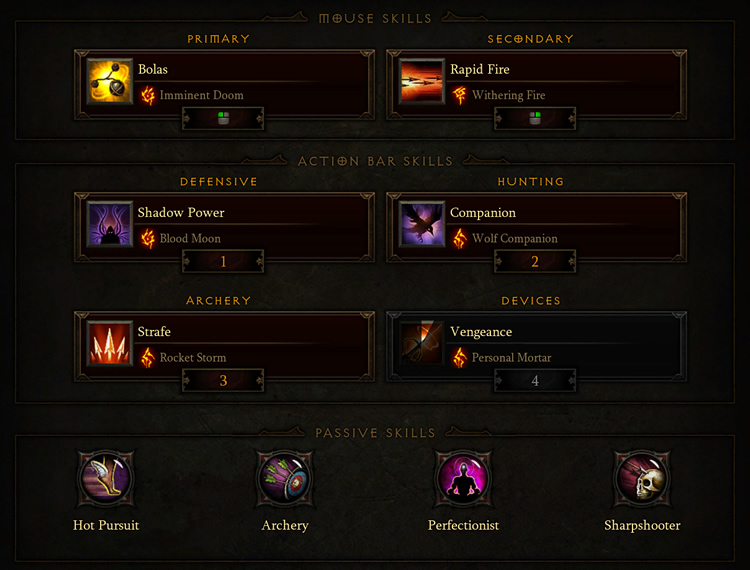 Here’s the method to my madness…

I’ve been putting all of my Paragon points into: Dexterity, +Crit Damage, and Resist All. previously I had been sticking my utility points into Life On Hit, but with my new setup and a decent amount of health now, I’ve moved those points into +Area Damage.

I’ve been stacking as much fire and AoE bonuses as I can get my hands on, as they provide a huge synergy with this build. An interesting piece I acquired during my first Malthael kill was a Rakoff’s Glass of Life amulet, which is a little bit ho-hum, but it actually works nicely with my build. It gives me some added survivability insurance, which offsets some of what I sacrificed by dropping my points in Life on Hit, but, it makes great use of the +Area Damage Paragon points spent, as it has a chance to proc area damage, plus it boosts my fire damage by a respectable +15%.

I think the only piece of gear which is truly needed for a build like this is Emimei’s Duffel for the instant Bola explosions. Once you get that you can start stacking fire damage from rares and you’re ready to start blowing up Sanctuary. If you happen upon a Buriza as well, then let me know how that goes. 🙂 It’s been a blast for me, no pun intended…well, I guess it was sort of intended. 😉

Like I said, this is basically a 2-button build about 80% of the time. Strategy involves spamming Bolas and activating the companion buff when needed. I go to Strafe when I need to reposition, heal using Shadow Power, or I am just simply surrounded. When I need to burn one target down or recover some HPS quickly, I use Rapid Fire.

So far I’m finding this build to be pretty effective for solo farming with my P64 DH on Torment I. I die occasionally, mostly where Vortex and Waller/Arcane affixes are at play, but all in all I find this to be a very effective setup.

Well, that’s all for now. I hope you enjoyed this look at my Demolitions Expert Demon Hunter.